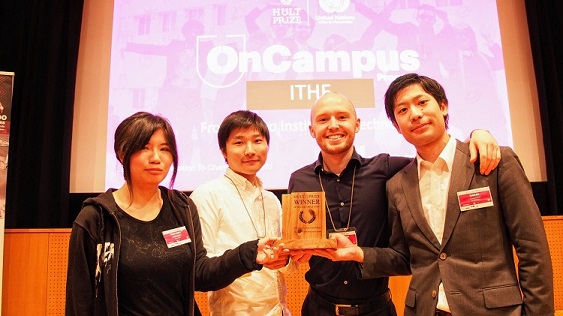 Hult Prize Tokyo Tech 2018 was held on 8th December, 2018 in Tokyo Tech and Team ITHE, consist of 4 AGL students including Mr. Kai, Ms. Nagata, Mr. Akagi and Mr. Spalthoff, was selected as a team for attending the next round of competition to be held in Singapore in March.

The Hult Prize is the world's biggest engine for the launch of for-good, for-profit startups emerging from universities with over 2500 staff and volunteers around the world and is widely known as most respectable business idea contest for students backed by world big names, such as Bill Clinton, a former US president and Prof. Muhammad Yunus, a Nobel prize winner.
Each university selects its representative team, which can be attended to the next round. Then, several teams may be chosen to join 6 weeks of accelerator program to be held in London, and then 6 finalist teams may be selected to make their presentations in UN in New York. The winner will be authorized to get $1mil from Hult foundation.

This time of Hult Prize Tokyo Tech 2018 was the first step. 17 teams attended the competition and expressed their business idea to solve the issue of "Youth Unemployment".

This time of event was planed and organized by Tokyo Tech students and supported by 8 enterprises including Gurunabi, Inc. and Innovations and Future Creation Inc. (MIRAI SOUZOU).

Team ITHE proposes to address the issue of unemployment through easier creation of new businesses:
- Development of an Internet of Everything (IoE) system that helps people cooperate based on the architecture of IoT, which is developed in our team member's laboratory
- Make launching a business easier by providing a platform where users can create a workflow and get matches with other users from a range of industries for tasks they can't complete on their own.
- Utilizing the IoE technology, allow users to manage the entire value chain from ideation to monetization via the workflow model

Team ITHE was selected by 10 judges from various kinds of fields and the prize was given to Team ITHE by Prof. Masu, President, Tokyo Tech.